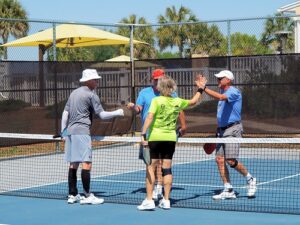 The U.S. Open Pickleball Championships are bigger than ever this year in Collier County, attracting more players and spectators from around the world.

The game is played on a badminton-size court with a hard paddle and a ball that resembles a whiffle ball.

The U.S. Open Pickleball Championships are a win for Collier County.

The county has won economically and socially from the event.

The championships, held at the East Naples Community Park, are bigger than ever this year, with more players and more spectators.

Events kicked off April 27 and run through Saturday, May 4. This year they’ve drawn a field of 2,161 players from 46 states and 15 countries.

More than 10,000 fans will attend to cheer on some of the best players in the world.

“It has put us on the map internationally because this is the U.S. Open,” said Collier County Commissioner Penny Taylor. “It has given us the impetus to build a facility that is just a first-class facility in a part of our town that basically was asleep. We are so grateful to pickleball.”

While the county has made big investments in pickleball, Taylor said they’ve paid off in spades.

“As much as we have given them, they have given back to us. The leadership is just extraordinary. We couldn’t ask for better leadership,” Taylor said.

While competition is fierce, the mood is festive at the championships. In fact, the event has been labeled the “biggest pickleball party in the world,” offering a fun atmosphere with food, drinks and entertainment every day.

“We want to be the pickleball capital of the world,” Taylor said. “We’d love it.”

East Naples Community Park now has 58 pickleball courts, with 54 of them configured for use in the tournament, plus the Zing Zang Championship Court, where high-visibility matches are played. All courts were recently upgraded through the county’s Parks and Recreation Department.

“It’s growing, and we’ve made a commitment as a county to keep up with pickleball, and we’re better for it,” Taylor said.

The county has not only invested in more pickleball courts, it also has spent hundreds of thousands of tourist tax dollars since their inaugural year in 2016 to help promote the championships. In the last sponsorship contract, the county agreed to spend $345,000 on marketing for the event over three years.

“It’s really not the birth of pickleball here,” Taylor said. “It’s really the birth of the U.S. Open that Collier County has witnessed and been part of — and that’s the exciting part. We didn’t do it, but we opened our arms to it, so it’s something to be very proud of.”

Pickleball hasn’t just brought thousands of visitors to Collier County, she said, it has brought the community closer together, with more than 600 volunteers stepping up to help out with the U.S. Open championships this year.

The sport and the championships have also improved the quality of life in the community, offering a new way to socialize and stay healthy, Taylor said.

“It’s healthy,” she said. “It’s a wonderfully social game. It’s an athletic game and it’s something that is a lifelong game. That is what is so important. You have generations playing pickleball.”

Read this post in its entirety, see photos, and get related information on https://www.naplesnews.com/story/money/business/local/2019/05/02/u-s-open-pickleball-championships-boon-collier-county/3626095002/