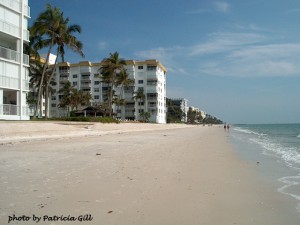 We may be a little biased, but we’ve long believed that the happiest places in America are by the sea.

And according to the results from a new Gallup-Sharecare poll, we’re absolutely right.

Researchers recently polled more than 337,000 adults in cities across the U.S. to gauge their states of well-being (including measures of financial, emotional, social, and physical wellness). And for the third year straight, those who reported the highest levels of satisfaction in their lives happen to reside along the sunny Gulf coastline of Naples, Florida.

For those who’ve visited, this probably won’t come as a surprise. From its gorgeous white-sand beaches to its adorable boutique-lined downtown and Old Florida vibes, Naples is an absolute dream of a city. It also consistently receives high marks in terms of desirability: In addition to earning a spot on our original list of Happiest Seaside Towns, it was also recently named as the best place to retire in Florida by SmartAsset and as WalletHub’s Best U.S. Beach Town To Live In.

While the Sunshine State certainly claims its fair share of happy people, it’s not the only coastal spot represented in the Well-Being list’s top 5 communities. Cape Cod’s always-charming Barnstable Town, Massachusetts, came in just behind Naples at number two, and over on the West Coast, the hip surf town of Santa Cruz ranked number four.

Want to see all the top-ranked beach towns? See the top 10 list of happiest and healthiest towns on the coast here.

It just goes to show that no matter which coast you choose, happiness is never too far away. See the top 10 communities with the highest well-being here: