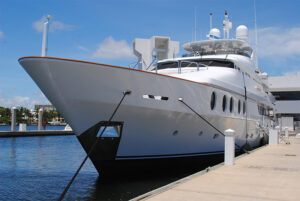 Four Southwest Florida residents are among the 400 richest Americans.

The Forbes 400 — described as the Definitive Ranking of the Wealthiest Americans — includes familiar names in the region.

The richest guy in Southwest Florida? That hasn’t changed: Shahid Khan, 69, a Naples resident, who weighs in at No. 61.

Khan’s net worth is currently estimated at $7.9 billion.

According to Forbes: An engineer by trade, Khan owns auto parts supplier Flex-N-Gate, the National Football League’s Jacksonville Jaguars and the United Kingdom’s Fulham football club. He took delivery of his 300-foot super yacht Kismet, which took six years to build, at the end of 2014.

The basis for Khan’s success: A one-piece truck bumper.

The second-richest businessman in Southwest Florida? That hasn’t changed either: Reinhold Schmieding, 64, ranks at No. 91 on the Fortune 400 list year, with a current net worth of $6.2 billion.

In 1981, Schmieding, a Naples resident and Michigan native, founded Arthrex, an orthopedic surgical tools company, in Munich, Germany. His company, now headquartered in North Naples, has developed thousands of products used in shoulder, hip and other joint surgeries.

Arthrex has made a name for itself in the field of arthroscopy internationally, designing, developing and manufacturing devices for minimally invasive orthopedic surgery, with more than 1,500 patents or patents pending.

No surprise, the list of the richest of the rich Americans, dropped by Forbes on Oct. 2, also includes these well-known locals:

Tom Golisano, 77, ranks at No. 195, with a current net worth of $3.8 billion. He founded payroll firm Paychex, a publicly-traded company, “with just $3,000 and a credit card.” He served as CEO until 2004 and remains chairman. A former New York resident, he sold the Buffalo Sabres in March 2011 for $189 million, rejecting a higher bid to keep the team from moving out of town.

Richard Schulze, 78, isn’t far behind Golisano. He sits at No. 207, with a net worth of $3.7 billion. The Bonita Springs resident founded Sound of Music in 1966, which eventually became the chain of superstores known as Best Buy. He served as Best Buy’s CEO from 1983 to 2002 and stepped down as chairman in 2012. He rejoined the company as chairman emeritus in 2013 after his attempts to take over the electronics retailer and make it private failed.