That boom you heard is Southwest Florida building industry: It’s back

Though new homes are being built at a furious pace, real estate market analysts say they aren’t making a dent in Southwest Florida’s housing shortage.

Shelton Weeks, chairman of the department of economics and finance at Florida Gulf Coast University south of Fort Myers, said the surge is driven by the fact that home prices finally have risen above building replacement costs.

But he doesn’t expect new construction will occur fast enough to have a big effect on the resale market for at least two years.

“I don’t think it will take the edge off,” he said. “I expect a healthy market, but inventory will remain tight.”

The latest statistics from MetroStudy show that for the second quarter, annual housing starts were up nearly 42.8 percent in Collier County and 40.7 percent in Lee County from the same period a year earlier.

The firm expects housing starts to continue to increase steadily for the rest of the year.

Meanwhile, builders are underscoring their confidence that the boom will continue by taking out new permits.

In August, they were up 30 percent year-to-date compared with the same period a year earlier in Collier County and 42 percent in Lee, the National Association of Home Builders said.

Naples real estate broker Brenda Fioretti notes that builders are building in every price range and location — except the beach, where land is scarce. Many wealthy buyers are buying an older home for its land value, tearing it down and building a custom “dream home,” she said.

Currently there are more than 45 active new home communities from Estero to south Collier County, the web site Newconsearch.com says. Others will be launched soon.

Here’s a sampling of what’s available: 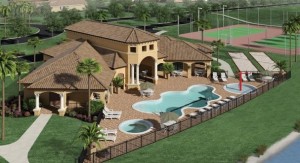 The clubhouse at Bonita Lakes will include a resort-style swiming pool and a separate shallow splash zone. There also will be a Har-Tru bocce ball court and lighted Har-Tru tennis courts. photo: Naples News

Ground-breaking for the clubhouse of this gated community took place in September. About 45 homes are in various stages of permitting and construction. Ten of the home designs have first-floor master suites.

Grand opening of models will take place Nov. 2, but 15 percent of the homes have been presold. Homes are targeted to move-up buyers and empty nesters. The project is expected to be completed in 2014.

On the edge of Rookery Bay, the 2,400-acre master-planned community once known as Sabal Palm will preserve half of the land. Homes will have an Old Florida design.

The single-family homes are targeted to families; 50 have sold during preconstruction. Eight models will soon open; 10 different floor plans are offered with three-to-six bedrooms. Some lots have lake views.

The first phase of seven buildings in this community is sold out, as are four of six new buildings under construction. Buildout is anticipated in three years. About half of the homes have been sold.

Former NFL player Syd Kitson and his partners bought the former Tuscany Reserve in 2011. Now 12 builders are creating homes along the Greg Norman/Pete Dye golf course. By January, phase one of the clubhouse, seven new models and 20 ready-to-move homes should be ready. The project should be built out in 2017. Ten percent of the homes have been sold.

This project is a gated condominium community within the Pelican Landing master-planned community.

A model is under construction at this gated neighborhood, which is part of the Spanish Wells Golf and Country Club. Residents will have privileges at the Tarpon Cove Yacht and Racquet Club in North Naples.

More About Buying A Home:
The Housing Market Continues to Progress
Amid Falling Foreclosure Rates and Rising Prices, Trade-Up Buyers Are Coming Back