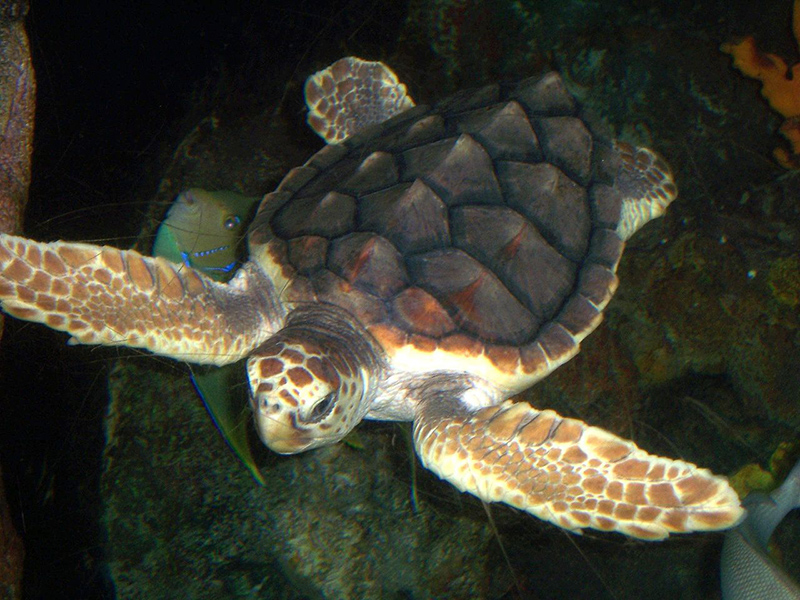 Published by davidflorida on July 2, 2020

Baby sea turtles flying through the air? Fanciful and comical as that idea sounds, it actually takes place sometimes at Juno Beach during the height of sea turtle nesting season.

“By the end of peak season, because we have so many nests, we’ll start seeing turtles digging up other turtles’ nests just because there are so many on the beaches,” said Dr. Justin Perrault, director of research at the Loggerhead Marinelife Center in Juno Beach. “Sometimes, especially when we have high green turtle and high loggerhead years that coincide, you’ll see hatchlings from a nest that were ready to emerge and another mother turtle is digging on top of those and flinging the little hatchlings that are under the sand into the air inadvertently.”

Florida is a globally important nesting site for the loggerhead species, and research indicates Juno Beach may be the loggerheads’ most important nesting beach in the world. While nests number in the tens of thousands on that 9.5-mile stretch of beach, loggerheads — and their cousins the green, leatherback and occasionally the Kemp’s ridley sea turtles — nest on many beaches in Florida, which makes sea turtle and beach habitat protection critically important throughout this state. Some Southwest Florida beaches see nesting that numbers in the hundreds to low thousands each season, but sea turtles even check in at Key West to lay about a half-dozen nests per year. The nesting season is March 1-Oct. 1.

“We’ve never had a turtle nest on top of another nest,” said Denise Bohlig- Capone, who co-founded the volunteer Key West Sea Turtle Club with her husband, Ralph, about eight years ago. “Sea turtles seem to want their own space in Key West. It’s prime real estate, so they all grab their own little bit.”

An uptick of nest numbers in recent years seems to coincide with when various conservation laws went into effect, since sea turtles take up to 30 years to reach reproductive age. Protective laws range from federal endangered species listings and federally mandated turtle drowning prevention devices for nets on American commercial fishing vessels, to state laws protecting turtles from harassment and requiring permits and training to interact with turtles and nests for research purposes, to local beach lighting and seawall setback ordinances to keep the beaches dark and accessible for turtle nesting.

…read more of this article at its source on Fort Myers Florida Weekly. Enjoy the photos!