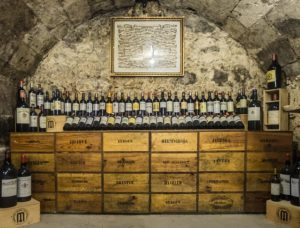 The Naples Winter Wine Festival started as a conversation among friends over lunch.

Seventeen years later, the annual festival has raised more than $160 million, making it the most successful charity wine auction in the nation.

The four-day affair has become synonymous with fine dining, the world’s best100-point wines and a thrilling auction selling overseas trips on jets, fast cars and private concerts with music stars.

Every cent of the money raised benefits the Naples Children & Education Foundation.

festival in 2001 to support charitable programs that improve the physical, emotional and educational lives of children in low-income families.

In a county where zero tax dollars support children’s social services, more than half of Collier County children are served, in some way, by the Naples Children & Education Foundation.

In January, the Naples Winter Wine Festival collected $15.1 million under the auction tent. It was its second-largest total so far, about $1 million less than raised in 2007.

On Monday, the foundation will divide $12.25 million among 34 local charities. The remaining $2.8 million will be reserved in a fund for programs and children in the future.

Choosing which charities to support is a decision organizers don’t take lightly.

“It’s very rewarding that we know the funds are effective … but it’s challenging because we know that it’s not going to meet that need and fund that child forever. There’s always that caveat.”

‘We thought we needed to help’

It all began with a conversation around a table. Twelve friends got together for lunch and talked about their passions for wine and helping children.

Many of them, such as Denise Cobb with the Boys & Girls Club, already were involved with local charities.

“We learned that none of the tax dollars raised in Collier County go to children’s social services, which is unbelievable and appalling,” said Cobb, a founding trustee of the festival and a 2017 cochair. “We thought we needed to help out.”

From the beginning, the Naples Winter Wine Festival was meant to bring attendees not only from Southwest Florida, but also from around the country. Organizers invited chefs, vintners and someliers from renowned locations all over the world.

“I’ve been to a lot of benefits,” Puck said in the kitchen of a top-floor Naples penthouse in January. “It’s nice to see people with money give back to something.”

Each year, festival-goers bid hundreds of thousands of dollars on auction lots that have included safari trips to Africa, a five-night stay in Argentina and a two-week cruise around the world.

In terms of totals raised under the tent, the wine festival in Naples is rated No. 1, according to the latest report from 2015 by Wine Spectator magazine, the definitive authority on charity wine auctions after compiling a list of the top 10 most successful festivals since 2001.

The extravagant Naples event has topped the list for 10 of the past 15 years, going head to head with the likes of Napa Valley and Sonoma, California.
“The Naples Winter Wine Festival is unique in that people really come knowing that they’re going to make a large donation,” said Jeff Gargiulo, a Napa Valley vintner who was also at the lunch table 17 years ago to start the conversation.

“The expectations are we’re going to have a lot of fun while we give money away,” Gargiulo said. “We make it as much fun as you can have legally.”

The festival starts with the kids.

On the first day, patrons gather at a charity organization in Collier County for “Meet the Kids Day,” to see firsthand how their donations impact the charity’s ability to expand, and to interact directly with at-risk children.

“(Patrons) see the actual need that is still existing,” Cobb said. “That gets them excited, and to meet the kids is an incredible thing.”

And the need for childcare in Southwest Florida is great, organizers say.

More than half of the children in Collier County are considered economically needy, Jimenez-Lara said. That equates to an income of about $48,000 for a family of four.

Grants from NCEF fund, on average, about 28 charities and their programs each year. Those charities, for example, provide food distribution to hungry children, host health care workshops at community centers and provide dental sealants for elementary school students to prevent cavities.

“The safety nets we built are designed to help kids from falling through the cracks,” Jimenez-Lara said. “We’ve tried to build systems of care so that you don’t have to put a Band-Aid on it. We want happy and real outcomes for the children, and not just that we bought them some time.”

Friends of Foster Children Forever, which provides abused, neglected and abandoned children with social, educational and financial support, has been a regular grantee of NCEF’s funding. Since its first grant in 2002, Friends of Foster Children Forever has received more than $4 million from NCEF, said Jane Billings, the organization’s executive director.

What makes the Naples Winter Wine Festival one of the best, organizers say, is NCEF has been able to bring charities with similar missions together to collaborate to aid the community. NCEF “plants a seed,” Jimenez-Lara said, and then lets the work be done.

It’s a rare practice in communities across the country, Jimenez-Lara said. Many charity organizations compete against one another to receive grants and funds.

“The respect and trust you earn by being one of their organizations builds and open doors,” Billings said. “This community would not be where we are in caring for our children if we didn’t have NCEF. They have changed the whole infrastructure of our community and how we care for our children. … I don’t know anywhere else where this is happening.”

How grants are decided

It takes about six months, Jimenez-Lara said, for an 11-member board to decide how to divide millions of dollars collected from the auction.

At 4 p.m. Monday at Bay Colony Golf Club in Naples, NCEF will announce which 34 charities will receive grants, and how much they will get from the $12.25 million pot.

“I think the work that we do is so important and so special,” Jimenez-Lara said. “We work really hard to be good stewards of the money we raised, but I also think the happiest part of this is that we’ve made such large strides as a community.

“Where we get to divide the money is a very special day for us.”