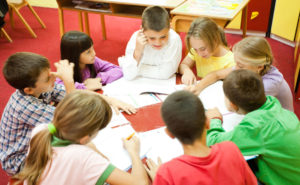 Ten years after Collier County Public Schools was put on probation by AdvancED, a school accreditation agency, the district learned Thursday they had “blown the lid off” their recent evaluation scores.

“I have five grandchildren and I would feel very comfortable sending them to any Collier County school,” said Dr. Edlow Barker, lead evaluator of the AdvancED external review team.

One member of the team, Dr. Elizabeth Davis, called CCPS a “model school district.” “These are by far the highest overall scores I’ve ever seen. They exceeded the average for every single indicator,” Davis said.

Davis, who also works as the superintendent of Eufaula City Schools in Alabama, has helped evaluate roughly 35 school districts for AdvancED. “If my school district came close to this I would be ecstatic,” she said.

“We all knew that we had a good school system, but to see it as compared to a worldwide average justifies all the hard work our teachers and administrators are putting into our schools,” said school board chair Roy Terry.

Thursday’s meeting was intended to provide preliminary results. An official report will be submitted in 30 days.
Accreditation results are presented every five years. The accreditation process is a continuous one that occurs over this five-year period.

The AdvancED team was comprised of 10 members who visited 128 classrooms in 18 schools and reviewed tens of thousands of parents, staff and student surveys.

Barker said his team was most impressed by the district’s can-do attitude. “From the superintendent to the teachers to the administrator, we saw an attitude of ‘we’re going to make this work for our kids,’ ” he said.

Barker commended CCPS on the sense of pride parents, teachers and students had in their school. He noted the wide range of economic circumstances and language barriers that exist among the county’s students and said he was impressed by the district’s ability to recognize the need for “equity with differentiated support” to help disadvantaged students succeed.

The district was also praised for prioritizing communication with the community through social media, a television program, comprehensive websites and brochures. Barker said this had resulted in a community that is “buying ownership in the success of the district.”

Resources utilization was another major source of positive feedback. The accreditation team recognized the district’s “outstanding” facilities and commended the district’s commitment to becoming debt-free in the next 10 years.
Barker singled out Superintendent Kamela Patton, calling her a “highly visible, highly focused individual” who has set an example for leaders throughout the district. Her work, Barker said, has encouraged principals and teachers to foster a positive climate for students who feel “supported” and “empowered.”

The accreditation team made note of only one significant area where the district could improve: the school board.
Two sessions ago, in 2007, the district was placed on probation due to concerns over discordance on the school board. Although the district has come a long way since then, Barker said the team heard from a number of concerned community members about the divisive nature of the board. “Our children are watching us and they learn from us,” Barker said. “We as adults have an awesome responsibility as employees of the school district to set the tone. It helps when there is a united vision from the top.”

Newly elected board members Stephanie Lucarelli and Eric Carter, who campaigned on the promise of creating a cooperative environment, have only been in power for three months thus it is unclear whether these complaints were directed at the current or previous board, or both. “This feedback will definitely force us to look at how we work together and to be sure we’re doing what’s in the best interest of all our kids,” Lucarelli said. Lucarelli and Carter agreed with Barker’s recommendation to focus on board member development and training. All five board members have been attending regular work sessions to facilitate this effort but the newcomers said they would strongly consider undergoing official training through the Florida School Board Association.

Overall, Barker said he was “very impressed” with the district’s results and that his committee would be recommending the district for full accreditation.

After the presentation Patton had a difficult time holding back tears as she reflected on the overwhelming positive feedback. “It’s been five years,” she said, referring to how long it had been since she became superintendent. “All the work has paid off.”

Patton said she felt a “deep sense of pride” in the district and was thankful for the “outstanding” students, parents, teachers, administrators and community members of the district. “This is a big moment for us,” she said. “I’m looking forward to sitting back tonight, taking a deep breath and looking at the collective great work we have done.”

“We all knew that we had a good school system, but to see it as compared to a worldwide average justifies all the hard work our teachers and administrators are putting into our schools.”