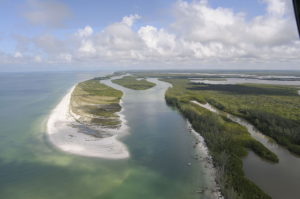 Aerial view of an island in Rookery Bay Photo: by RW

“The Sunshine State might be best known for its oranges, …but it also leads the country in air quality. With sea winds sweeping over the mostly flat terrain from both its east and west coasts, noxious emissions tend to be blown away. …The mainstays of the state’s economy—tourism, agriculture, and international trade—are all relatively light in pollution.

The cleanest city in our analysis, Naples, in southwest Florida, is famous as an ecotourism destination. Surrounded by natural reserves like the Everglades, Ten Thousand Islands, and Corkscrew Swamp Sanctuary, it also has one of the few remaining undisturbed mangrove estuaries in North America.” —realtor.com

The city tops realtor.com’s list of the least-polluted cities in America.

To determine where the air is pristine and the water is safe to drink, the website ranked the 10 largest metro areas based on the following factors:

Florida leads the way in air quality, and Naples is the cleanest city in the state, helped by its natural surroundings, which include the Everglades, Ten Thousand Islands and the Corkscrew Swamp Sanctuary.

“Collier County has more acres of protected lands than any other county in Florida,” Renee Wilson, a spokeswoman for the Rookery Bay National Estuarine Research Reserve, told realtor.com, pointing out that’s mostly due to the wetland characteristics of the Everglades.

The No.1 ranking didn’t come as a big surprise to Dominic Pallini, president of the Naples Area Board of Realtors.

“Our state and local government (Collier County) work hard to make Florida, Naples especially, the cleanest and safest place in the country. It makes Naples a prime location to purchase a home,” he said in an email.