Naples, Fla. (January 17, 2020) – According to the 2019 Year End Market Report released by the Naples Area Board of REALTORS® (NABOR®), which tracks home listings and sales within Collier County (excluding Marco Island), existing home sales through December 2019 are the highest in a decade.Overall closed sales in 2019 increased 5.6 percent to 10,244 closed sales compared to 9,704 closed sales in 2018. In comparison, the only other year that came close to reaching this stellar sales activity was 2015, which had 10,154 closed sales. 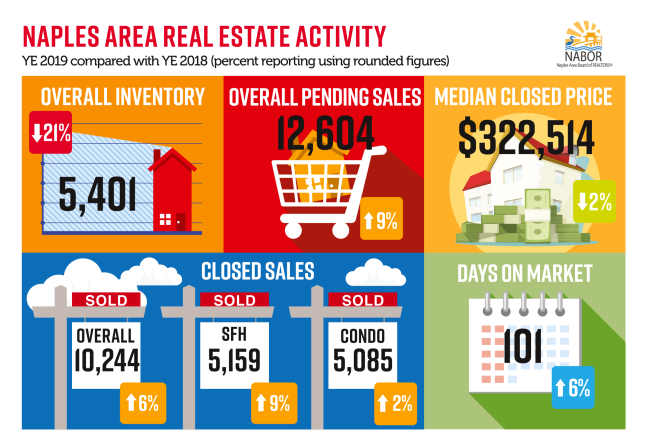 Condominium closed sales held steady with a 1.9 percent increase in 2019 to 5,085 compared to 4,990 in 2018, but broker analysts reviewing the year-end report anticipate closed sales of condominiums in January will be much higher, especially since pending sales for condominiums increased 28.8 percent in December.

Interestingly, inventory levels dropped in all price categories except in the $2 million and above condominium market, which reported a 16.3 percent increase in inventory during December.

Broker analysts agreed that new state actions, led by Governor Ron DeSantis, to address water quality issues during 2019 made a significant impact in local real estate activity during 2019, especially during the summer months.
On whether an election year is a good time to buy a home, broker analysts contend that stable pricing, great financing rates, and above state-level months of supply in inventory are three great reasons for Naples real estate agents to be optimistic in 2020. Of course, location shouldn’t be overlooked, as well.
To view the entire report, visit www.NaplesArea.com
Bookmark the permalink.