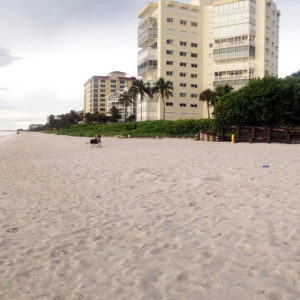 Project would include 18-story tower

A well-known Naples developer is looking to build its first high-rise residential tower near Vanderbilt Beach. The 18-story residential building is planned by an affiliate of Stock Development. It would be built over three stories of parking, giving it added height. The tower would be part of a mostly residential luxury project that would transform the northeast corner of Vanderbilt Beach Road and Gulf Shore Drive. Dubbed One Naples, it would have 300 residences, with the other units offered in low- and mid-rise buildings of up to five stories.

The developer will hold a public meeting about the project Wednesday at The Ritz-Carlton beach hotel in North Naples from 5:30 p.m. to 7 p.m. in the Plaza Ballroom. The mixed-use project will require a rezoning and growth plan amendment, but Stock Development hasn’t applied for the changes yet. The developer has the land under contract.

The current zoning of C-3 allows for much more intensive development, far beyond what’s on the seven-acre site, comparable to Mercato or Venetian Village, said Claudine Leger-Wetzel, a vice president of sales and marketing for Stock Development. The current zoning allows for such uses as gas stations, bars, drugstores and movie theaters, as well as shopping centers. Up to 175,000 square feet of commercial development could be built on the land, which wouldn’t look as good as Naples One and would generate a lot more traffic, Leger-Wetzel said.

Rather than waiting to talk to neighbors after applying for the rezoning with Collier County, Stock Development decided to take a more proactive approach in sharing information and getting input in advance of the formal application, which it expects to make later this month, Leger-Wetzel said. “We’re invested in the community and we believe it’s a good use of the site and will enhance the area,” she said.

It would be a redevelopment project, replacing several older buildings, most of which are more than 30 years old.
The Beach Box and Beach Store would not remain as part of the new project. These neighbors would not be affected: Barefoot Pelican, DaRuMa, Vanderbilt Palms, and Buzz’s Lighthouse Restaurant & Inn. The new development would include 25,000 square feet of retail space. Planned tenants include a South Bay Realty office, a coffee shop, deli and restaurant. A marina on Vanderbilt Lagoon also would be a part of the project.

The development would be built in phases. The approval process is expected to take nine to 12 months, with presales anticipated to start in 2019.

Stock Development sent out 4,500 invitations to area residents for this week’s public meeting, which will be one of several, Leger-Wetzel said. Since word is just getting out about the project, it’s unclear how much opposition it could face.

Although it would transform the property, especially with the addition of a high-rise, Keith Gelder, a vice president of land development for Stock Development, said it’s surrounded by tall buildings, so it wouldn’t be out of character for the neighborhood. “There are quite a few to the south of us,” he said. Nearby buildings include the 13-story Ritz-Carlton, 19-story Trieste and 21-story Remington at Bay Colony.

Don’t want to wait 2+ years to buy a condo in Naples-Bonita Springs-Marco Island area? To view homes currently for sale in southwest Florida call David Critzer at 239-285-1086, or search for homes on David’s website http://davidnaplesmarco.com/