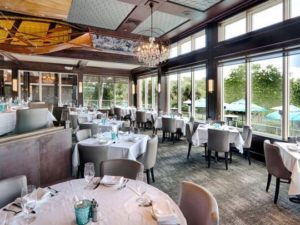 Looking for dining with a view?

Two waterfront restaurants with picturesque views of Naples waterways have made a national list of most scenic places to eat.

OpenTable, an online restaurant reservation website, announced its 100 most scenic restaurants in 2018 based on the reviews of OpenTable’s verified diners, according to the website. The list highlights restaurants that offer “breath-taking views of nature, cityscapes and travel-worthy landmarks.”

The Bay House, overlooking the brackish waters of the Cocohatchee River, and The Turtle Club, the Vanderbilt Beach Resort’s beach-side restaurant, both made the OpenTable list.

The dining room on the water was newly redone in 2015 in muted, elegant colors of the waterscape and features a hand-crafted dory and other watercraft suspended from the ceiling. (Photo: Contributed)

Tucked away off U.S. 41 North in North Naples, The Bay House’s indoor and outdoor seating gleans with modern finishes, its golden lights reflecting off the bay. The menu offers an eclectic claw bar of beer-brined, peel-and-eat Gulf shrimp and plump oysters by the dozen or half-dozen. Its well-crafted entrees include pan-seared swordfish and smoked bacon and basil crab cakes.

The Turtle Club is located at Vanderbilt Beach Resort. Lauren Kummer via Wochit